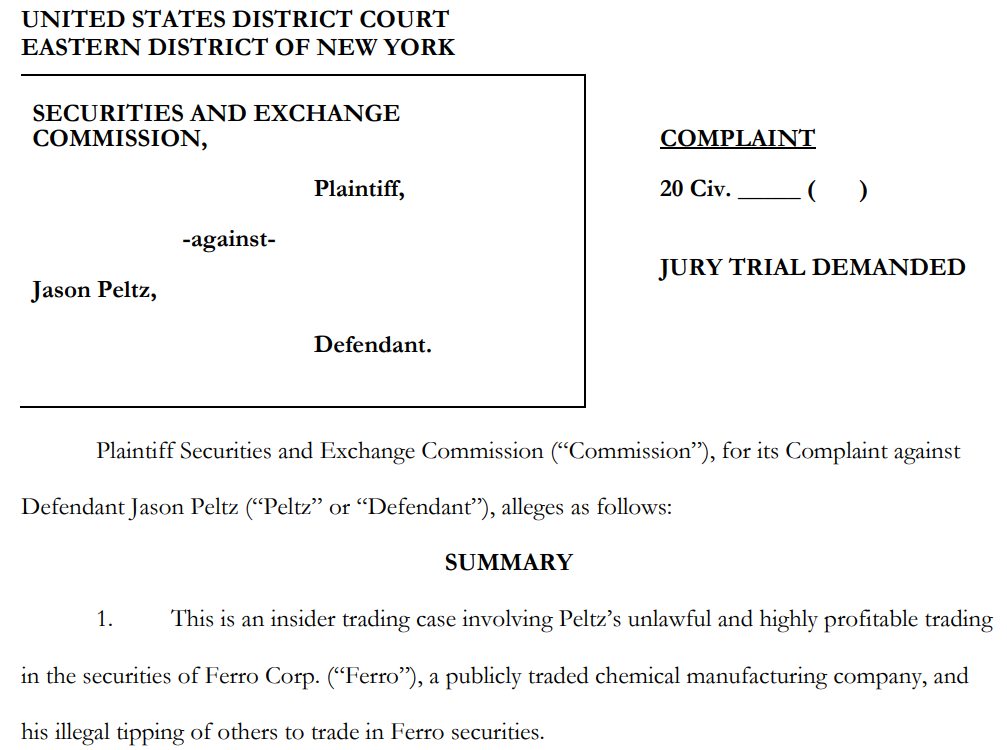 A New York man faces charges after authorities say he ran an illegal trading scheme that derived information from company insiders and a business journalist about corporate transactions and news that were not yet publicly disclosed.

Jason Peltz, 38, was indicted by a federal grand jury on March 23 on multiple counts of securities fraud, money laundering, tax evasion and related conspiracy charges, according to the indictment filed in the Eastern District of New York.

Peltz, a principal of the Peltz Financial Firm and co-founder of a mobile app start-up, is accused of working with over a half-dozen unnamed and unindicted co-conspirators to learn about impending takeovers and other market-moving news between November 2015 and October 2020.

He also cultivated relationships with a business journalist who would write articles based on his insider information, which moved the stocks involved.

The indictment does not name the journalist or media outlet, but reports have identified him as Ed Hammond, a reporter based in New York who has been covering financial markets for Bloomberg News since 2015. The reporter is not under indictment and has not been accused of misconduct.

A Bloomberg spokesperson told The Washington Post, “Ed Hammond is a very accomplished reporter. We’re not aware of any facts to suggest any wrongdoing on his part.” Hammond had declined to comment on reports.

A central allegation in the indictment is that Peltz obtained a tip in February 2016 through an unnamed insider at Ferro Corp (NYSE: FOE), an Ohio-based specialty materials manufacturer, about a likely takeover.

Before any public disclosure of a takeover approach, Peltz allegedly traded in Ferro common stock using the brokerage accounts of his co-conspirators. He then tipped off Hammond to the news, who wrote about the takeover approach by Apollo Global Management, a leading private equity firm, which sent the company’s shares higher.

The indictment also accused Peltz of using his relationship with Hammond to secure information about “forthcoming articles regarding certain companies.”

As a result of his trading activity, Peltz received “large payments” from co-conspirators, along with other benefits, the indictment states. In order to hide the income from the Internal Revenue Service (IRS), Peltz was paid in corporate and nominee bank and credit card accounts, it states.

At the time, Peltz reported he had been unemployed since December 2015 and had no income. He has subsequently been charged with attempting to evade payment of $1 million in outstanding tax liabilities, penalties and interest, according to the indictment.

“While most Americans dream of winning the lottery or finding a stock before it takes off, Peltz rigged the system for his personal gain, creating fortune for himself at the expense of others,” IRS Special Agent-in-Charge Jonathan Larsen said in a statement. “Peltz stands accused of a multitude of crimes that go far beyond his initial investments, extending to tax crimes and lying.”

Peltz was arrested on a complaint in December 2020 and will be arraigned on the indictment at a later date. If convicted of securities fraud, Peltz faces up to 25 years in prison.