"we really stand aside and watch Donald Trump turn this country into another Haiti. No way!" says Abbey Laurel-Smith

I am sure you are aware Donald Trump is actively trying to get himself another four years in office as President, right!

Well, look at it this way, he messed up farmers, tore up trade agreements, did nothing to stop opioid ravaging through communities, and rather than stop there, he’s now talking about finishing off medicare, social security and SNAP – if given another four years in office.

Thing here is, “can we really stand aside and watch Donald Trump turn this country into another Haiti. No way!”, says Abbey Laurel-Smith a Radical Republican and a 2020 Presidential candidate running against Donald Trump this general election.

Now, if what i’ve just pointed out aren’t critical enough reasons to make you vote against Donald Trump this general election, then think about the state of our nation today. Think about Donald Trump calling COVID-19 a hoax, denying science and letting Americans die when they shouldn’t have. C’mon! Vietnam and the civil war put together didn’t even kill this much in a day.

And with all the smiles and all the expensive political ads, he’s been trying to paint himself as a lover of coal, a champion of freedom, liberty, law and order above all.  But is Donald Trump really  true to any of these?

That is why I am saying, “we should not stand aside and watch Donald Trump turn this country into another Haiti!”

I am Abbey Laurel-Smith.  A Radical Republican and a 2020 Presidential candidate you’ve never heard of because Donald Trump used his might and office to deny any challenger from the Republican party to run against him.  That by itself is unconstitutional, and another one of many reasons I am firmly against Donald Trump for another term in office – as President of the United States. 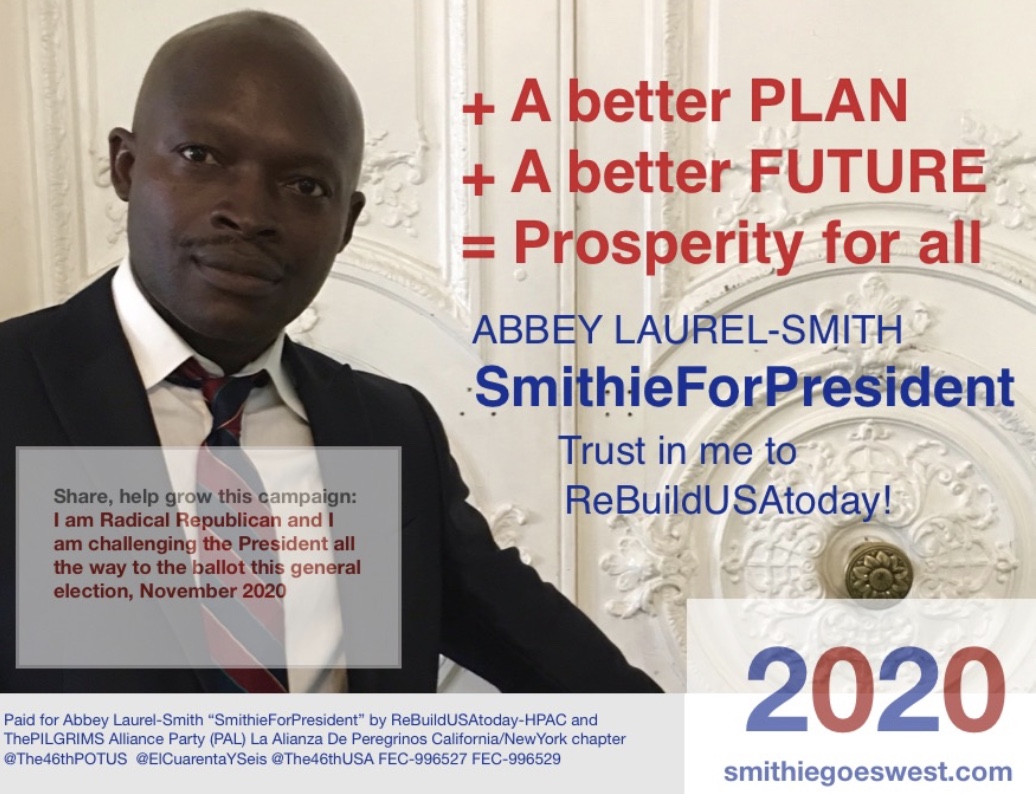 At this stage, I could only implore you to please take a closer look at the choice of Abbey Laurel-Smith for President, United States 2020.  Many in the coal states have, and many more in our farming communities are silently doing so now.

My bet is you’ll change, if and when you do.  Therefore I thank you in advance for your time and for willing to consider a new candidate, Abbey Laurel-Smith as Smithie for President.

Don’t need to tell you what to do with that dumb print of yours if and when you make it to the ballot on election day, or what box to tick if we all have to vote by mail.

All I would say for now is, God bless you for playing your part to step in and ReBuildUSAtoday!