This official press release by Viscount Mining Corporation is provided by Doc’s Consulting Ltd.
Please contact Craig Doctor if you have any questions: 1+(604) 278 4656

Vancouver, British Columbia – (June 2, 2021) – Viscount Mining Corp. (TSX-V: VML) (OTCQB: VLMGF) (“Viscount Mining”) is pleased to announce it has received the first hole of ten drilled in our second phase of a three-phase drill program at its Silver Cliff property in Colorado. 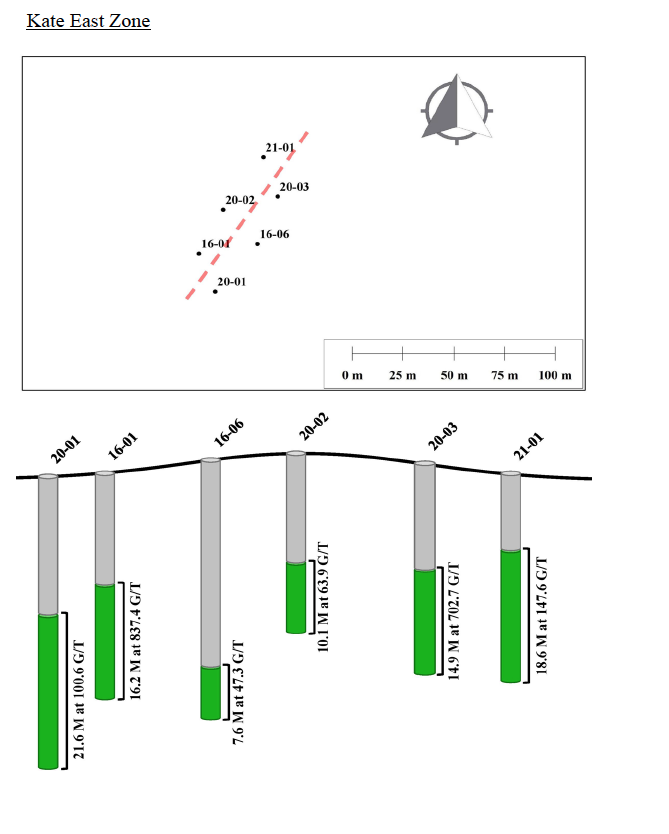 The holes drilled in the Kate East Zone trend to the North-East. A similar trend was also noted in the geophysical magnetometer survey. Both the low response and the high response shows a strong North-East, South-West trend. This will be further investigated this summer. The Kate East Zone consists of 17 holes to date, and measures about 300 meters from South-West to North-East, and is 125 meters at it widest. It is currently open ended in both directions, and the sides are not yet defined. An additional four holes were drilled in this zone in April, and we are awaiting those results.

Viscounts combined 2020/2021 program has three objectives. They are to expand on ACS 2018 resource estimate of the Kate Silver Resource. We are also investigating the Kate East Zone, as well as continued evaluation of several other promising targets.

Jim MacKenzie President and CEO, “We are very proud of the progress Viscount is making at the Kate Silver Deposit. The drill results from the Kate East Zone has demonstrated the deposit to be open ended in all directions. The next phase of drilling will allow us continue to step out drill holes on all sides of the deposit which will make our goal of expanding the current NI 43-101 resource possible.” 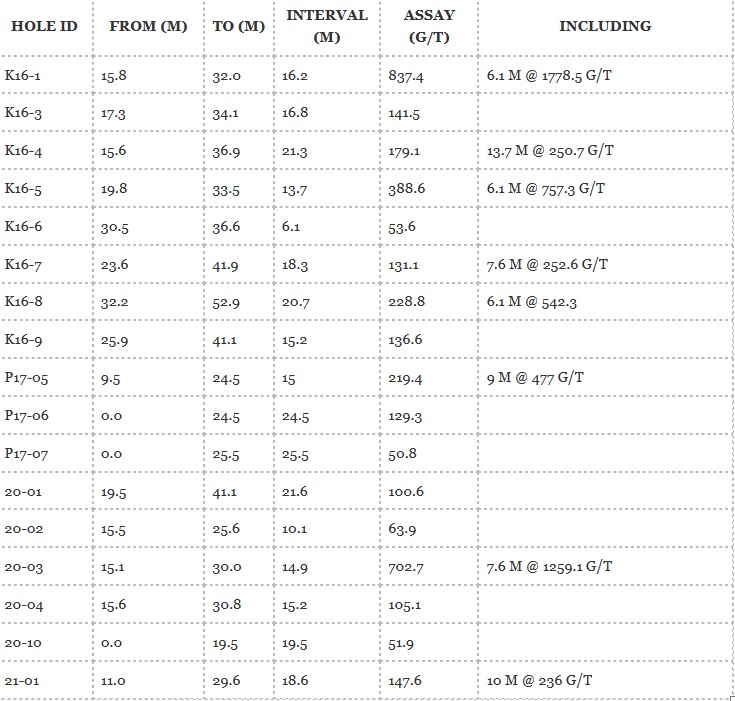 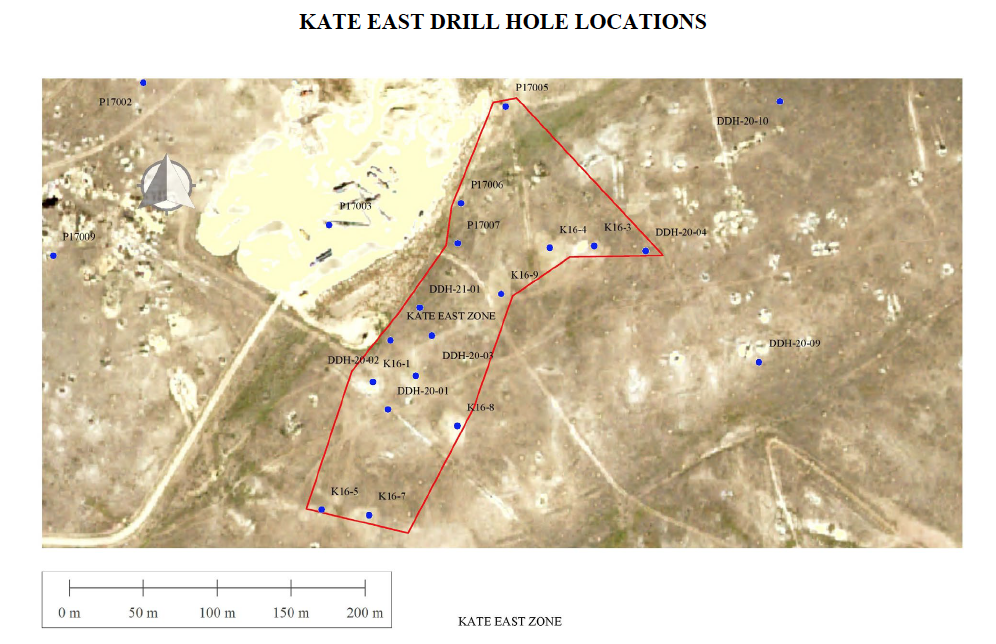 An internal report from CoCa Mines in 1983, estimated a potential resource of 40 million short tons (not NI 43-101 compliant and therefore not to be relied upon) at the Passiflora, based on 14 drill holes with the best intercept reporting to be 256 g/t silver and 1.4 g/t gold. Viscount drilled one hole in the Passiflora in 2020 to a depth of 193.9 m that showed anomalous silver throughout, some anomalous gold as well as strong silica and clay alteration and pyritization over most of the hole. An additional 3 holes were drilled in April in this target, and Viscount is waiting to receive the analytical results.

Tenneco Minerals leased the Kate property in 1987. They had the previous drill data available to them, which was the results from 11,930 meters in 249 drill holes that had been done since 1968. The following two years Tenneco drilled an additional 143 holes totaling 7,949 meters. Based on the accumulated data and a feasibility study, Tenneco Minerals made the decision to construct a $35,000,000 milling operation for the extraction of the silver reserves at Silver Cliff. Shortly thereafter Tenneco decided to sell the minerals division, and the planned milling operation was abandoned.

Phase 3 will be focusing on the discoveries of Phase 2, and looking towards expanding the Kate Silver Resource to the North.

All the drilling to date has been core. The company has implemented a rigorous quality assurance/quality control program at the Silver Cliff project. Core is retrieved from the drill site to a locked storage facility, where it is logged and then cut by independent geologists. Half of the core is bagged, and standards, blanks and duplicates are frequently inserted in to the sample stream. These are then boxed and then shipped via UPS to Skyline Labs in Tucson, Arizona. Pulps and rejects will then be retrieved, and stored with the split core at our locked facility.

The scientific and technical information contained in this news release has been reviewed and approved by Harald Hoegberg PG, an independent consulting geologist who is a “Qualified Person” (QP) as such term is defined under National Instrument 43-101 – Standards of Disclosure for Mineral Projects (“NI 43-101”).

Viscount Mining is a project generator and an exploration company with a portfolio of silver and gold properties in the Western United States, including Silver Cliff in Colorado and Cherry Creek in Nevada.

The Silver Cliff property in Colorado lies within the historic Hardscrabble Silver District in the Wet Mountain Valley, Custer County, south-central Colorado. It is located 44 miles WSW of Pueblo, Colorado, and has year-around access by paved road. The property consists of 2,319.48 hectares where high grade silver, gold and base metal production came from numerous mines during the period 1878 to the early 1900’s. The property underwent substantial exploration between 1967 and 1984.

The property is interpreted to encompass a portion of a large caldera and highly altered sequence of tertiary rhyolitic flows and fragmental units which offers potential to host deposits with both precious and base metals. This has been demonstrated in the mineralization historically extracted from the numerous underground and surface mining operations. Drilling in the 1980s by Tenneco resulted in a historical pre-feasibility study on which basis it was planned to bring the property to production. The plan was abandoned following a takeover by another company.

The Cherry Creek exploration property is in an area commonly known as the Cherry Creek Mining District, located approximately 50 miles north of the town of Ely, White Pine County, Nevada. Cherry Creek consists of 293 unpatented and patented claims as well as mill rights and is comprised of more than 2,442 hectares. Cherry Creek includes more than 20 past producing mines. In January 2021, Viscount entered into an exploration earn – in agreement with a wholly owned subsidiary of Centerra Gold Inc. Centerra is a Canadian-based gold mining company focused on operating, developing, exploring and acquiring gold properties in North America, Asia and other markets worldwide and is one of the largest Western-based gold producers in Central Asia.

For additional information regarding the above noted property and other corporate information, please visit the Company’s website at www.viscountmining.com

ON BEHALF OF THE BOARD OF DIRECTORS
“Jim MacKenzie”
President, CEO and Director
For further information, please contact:
Viscount Investor Relations
Email: info@viscountmining.com

This news release includes certain statements that may be deemed “forward-looking statements” within the meaning of applicable Canadian securities legislation. Forward-looking statements include, but are not limited to, statements with respect to Viscount Mining’s operations, exploration and development plans, expansion plans, estimates, expectations, forecasts, objectives, predictions and projections of the future. Specifically, this news release contains forward looking statements with respect to the Offering, the receipt of required approvals, the timing of thereof and the amount and use of proceeds therefrom. Generally, forward-looking statements can be identified by the forward-looking terminology such as “plans”, “expects” or “does not expect”, “is expected”, “budget”, “scheduled”, “estimates”, “projects”, “intends”, “anticipates”, or “does not anticipate”, or “believes”, or “variations of such words and phrases or state that certain actions, events or results “may”, “can”, “could”, “would”, “might”, or “will” be taken”, “occur” or “be achieved”. Forward-looking statements are subject to known and unknown risks, uncertainties and other factors that may cause the actual results, level of activity, performance or achievements of Viscount Mining to be materially different from those expressed or implied by such forward-looking statements, including but not limited to: risks related to the exploration and development and operation of Viscount Mining’s projects, the actual results of current exploration, development activities, conclusions of economic evaluations, changes in project parameters as plans continue to be refined, future precious metals prices, as well as those factors discussed in the sections relating to risk factors of our business filed in Viscount Mining’s required securities filings on SEDAR. Although Viscount Mining has attempted to identify important factors that could cause results to differ materially from those contained in forward-looking statements, there may be other factors that cause results to be materially different from those anticipated, described, estimated, assessed or intended.