Janus Trying to Fool Us Twice-Slavery by Another Other Name?

October 29, 2020 (Viz Release) – – Janus, the Greek god with two faces—one looking ahead, the other looking back is how January was named, but January could bring more deception, says Dr. Richard Ruhling, author on current events and Bible prophecy.

He cites the virus last January as weaponized in Wuhan’s lab and pushed by forces favoring global government and control of the masses. Rudy Giuliani “asserted that Dr. Anthony Fauci approved a $3.7 million grant to the Wuhan laboratory tied to the coronavirus pandemic,” Google search

“But if I’m fooled twice, shame on me,” says Ruhling who paraphrases Shakespeare to say “slavery by any other name is still the same,” and it could be called “the Green New Deal.”

“The climate alarmists of our day would have us believe that a grave environmental crisis exists; one that requires immediate and drastic action in order to save the planet. The leaders of the United Nations tell us that the solution requires all nations to submit to a central government, a New World Order,” says Jonathan Brentner. 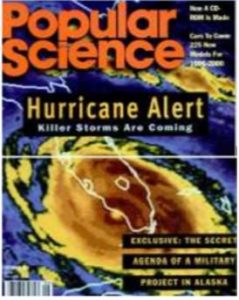 Brentner continues, “The UN’s strategy for resolving the climate emergency consists of seventeen goals that fall under their Agenda 2030. These objectives, however, go far beyond protecting the environment. They call for a Marxist type of government that distributes wealth evenly among all nations and all people.

The World Economic Forum (WEF) refers to this redistribution of wealth as the “Great Reset” with details to include the “Green New Deal” to be revealed January, 2021.

Global warming is not the problem–it’s the hurricanes and bad weather caused by “a little-known Pentagon project” reported in Popular Science, Sept, 1995.

Acres of microwave towers in Alaska beam high energy into the ionosphere to be reflected into the ocean, heating it up to cause El Ninos. It’s called HAARP –High Altitude Aurora Research Project.

The article said it’s “a little known Pentagon project.” Some say the Pentagon’s CIA is Catholics In Action (Google) because its leaders are members of Catholic secret societies like Knights of Columbus, Knights of Malta, Opus Dei, etc.

Their allegiance is to the pope and his agenda of world dominion via a UN New World Order and that’s why “leaders of the United Nations tell us that the solution requires all nations to submit to a central government, a New World Order.” Brentner.

Ruhling says the average Catholic may be a good citizen, but knows nothing of Vatican strategy to rule the world via the UN as supported by the imagery in Revelation 17 where a harlot rides the New World Order beast (government), but she is drunken with the blood of saints, verse 6.

A million Protestant Tutsis were slaughtered when UN vehicles everywhere did nothing in deference to the pope—they let the local (Catholic) government handle it, and John Paul later said ‘sorry.’

“If the pope knows so much about running the world, why doesn’t he solve the problem for all the Catholic countries south of our border,” says Ruhling who visited Colombia and Venezuela and found nice friendly people who all wanted to come to America—and they are coming, but why to this one Protestant nation with Constitution that kept religion out of laws as opposed to “Laudato Si’” which begs for a Sunday law. Par 237.

“Make America Great” as Solomon said by “righteousness exalting a nation.” That can’t be abortion or the “Supreme Court” new deal on marriage in 2015. It’s time to vote for God, morality, law and order, or this country is unlikely to last four more years.

Dr. Richard Ruhling’s latest book, Health, Happiness & Destiny Come from Wise Choices, is available on Amazon where the reviews are all 5-star, but for a better better price with two bonuses, the reader may visit http://HealthHappinessDestiny.com book tab.