October 5, 2020 (Viz Release) – – Today, our world is suffering and many feel helpless as it is difficult to attain inner peace when the weight of the world’s challenges renders us feeling powerless. What if our spirit teachers, or angels, could contact us directly to help us find our way – would you be willing to listen?

It is said that when the student is ready a teacher will appear. For the late Wilma Jean Jones, her teachers certainly did appear. “An Angel Told Me So” reveals the messages and guidance she received directly from angels for more than two decades. Her son, Michael McAdams, worked closely with his mother as these messages and teachings were dictated to her. Michael has lovingly preserved these teachings for all seekers looking for guidance, direction, and support. Readers can absorb the divine wisdom that Wilma Jean received and find solace as they walk their chosen paths. 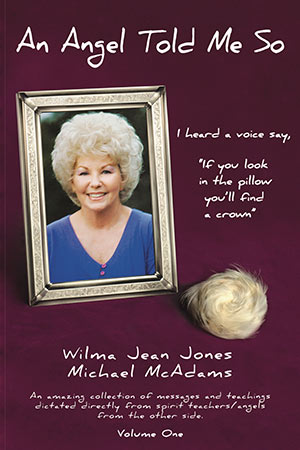 Michael McAdams is an Ohio native. He was born in Cincinnati. He attended and graduated from Monroe High School and went to the Miami University of Ohio majoring in Systems Analysis. Michael served his country in the Army from 1970-1972 and was stationed overseas in Germany. Michael returned to Ohio where he raised his daughters and continued his Mother’s work with the Angels.

“Everyone is spoken to; everyone has the innate ability to receive these messages and teachings. Wilma Jean is presenting these messages that allow people to know they too can receive. This collection of dictated messages offers seekers the opportunity to discover their own receptiveness and to realize that we all have Angels/Spirit Teachers ourselves. ‘We show you the way when so many have lost theirs.’ As Wilma received so too can other people receive” – Michael McAdams

“An Angel Told Me So” is the first book in a series of three volumes of messages and teachings dictated through Wilma that offers proof of our connection with angels. In sharing these messages, Wilma and Michael hope readers will discover the divine wisdom and comfort these teachings offer and explore a spiritual connection with their own spirit teachers. By connecting with our own angels we can overcome challenges and truly realize we are not alone.

The messages and teachings received by Wilma Jean appear to be woven with a universal thread that speaks directly to all sincere seekers of truth on a personal level. Each reader feels that they are being addressed as they deal with what is transpiring in their lives. Readers of this material will know that they too are being spoken to directly by the spirit teachers/angels inhabiting this realm and that these messages and teachings are intended for their guidance and the advancement of their purpose in this existence.

“An Angel Told Me So”, with its timely message of hope…is divine guidance for readers who are seeking the light in dark times.

Wilma Jean Jones was a devout Christian and a daily reader of her Bible. Jones was spoken to and advised throughout her life regarding spiritual matters. In 1977, she was led to sit down and receive messages and teachings dictated directly from spirit teachers/angels in dedicated sessions—and did so for the next 22 years. Working with her son Michael McAdams, this collection of messages and teachings are recorded in three volumes of the book “An Angel Told Me So”.

Michael McAdams has felt a sense of destiny and purpose his entire life. A lifelong sincere seeker of truth, he has endeavored to reach out with an open mind to all sources available. Although he was brought up in the Pentecostal church, McAdams has always felt more spiritual than religious. Communication from the highest possible source has been his goal as he enables his mind to receive information and direction that allows him to help the greatest number of people. McAdams offers a set of his own writings called “Spiritual Parchment Prints” available on his website at www.SpiritSpeaks.com

“An Angel Told Me So”