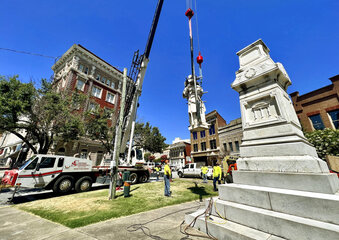 Two Confederate statue are being moved in middle Georgia's largest city after relocation plans were stalled for years by lawsuits.
Crews began moving the monuments Wednesday, The Telegraph of Macon reports, using $160,000 in private money raised by a community foundation.
The monuments are going to a park outside Macon's Rose Hill Cemetery, where 884 Confederate soldiers are buried, from locations on two downtown streets.
STATUE OF CONFEDERATE ROBERT E. LEE TAKEN DOWN IN VIRGINIAThe Macon-Bibb County Commission approved moving the monuments in July 2020 after years of advocacy, but lawsuits stalled the efforts.
One statue on Cotton Avenue, erected in a different location in the 1870s, represents an anonymous Confederate soldier.
Another monument on Poplar Avenue, built by the United Daughters of the Confederacy, was dedicated to "women of the South."
Macon's Urban Development Authority says it will redevelop the Cotton Avenue location to make more green space for the growing number of downtown residents.
The Cotton Avenue statue was a particular target for protests.
The Macon-Bibb County Commission voted 5-4 to move the monuments, but a resident sued, citing a Georgia law that says Confederate monuments can only be relocated to places of "equal prominence."
TIME CAPSULE FOUND AT CONFEDERATE GEN. ROBERT E. LEE STATUE SITE REVEALS CIVIL WAR-ERA ARTIFACTS"We’re not asking to put it in a dungeon.
This era is dead, dead and gone.
The Sons of Confederate Veterans and United Daughters of the Confederacy reached compromises with the city-county over the location near the cemetery.