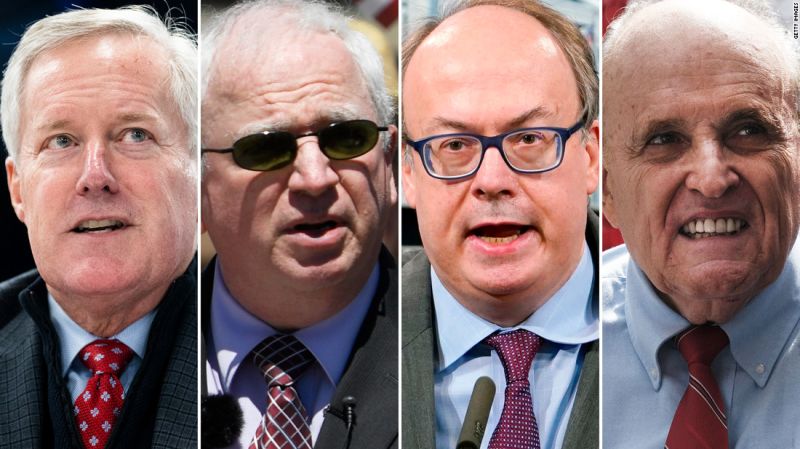 CNN —The House select committee investigating the January 6, 2021, insurrection is considering criminal referrals for at least four individuals in addition to former President Donald Trump, multiple sources told CNN.
The panel is weighing criminal referrals for former White House chief of staff Mark Meadows, right wing lawyer John Eastman, former Justice Department official Jeffrey Clark and Trump’s former lawyer Rudy Giuliani, the sources said.
The committee has not officially decided whom to refer to the Justice Department for prosecution and for what offenses, sources said.
Committee Chairman Rep. Bennie Thompson, a Mississippi Democrat, said Thursday that committee members are expected to reach a decision on criminal referrals when members meet virtually on Sunday.
Thompson told reporters on Thursday how members evolved towards the idea of issuing criminal referrals as the panel’s investigation went on.
Schiff told CNN there is a “consensus among the members” regarding referrals and that members are taking a unified approach on that front.
As to how many, we’ve not decided that yet.” CNN previously reported that the committee is weighing Trump and a number of his closest allies for criminal referrals.
Thompson said the panel is aiming to release its final report and vote publicly on criminal referrals on December 21.
Raskin also suggested Thursday that previous referrals to DOJ for contempt of Congress would not impact how the panel handles these criminal referrals.
“We obviously did contempt of Congress referrals earlier and there’s a whole statutory process for making that happen,” he said.
The FBI seized Eastman’s phone in June as part of its criminal investigation according to a court filing from Eastman.
Carter’s reasoning was a crucial acknowledgment by a federal court that Trump’s interest in overturning the election could be considered criminal.
Source