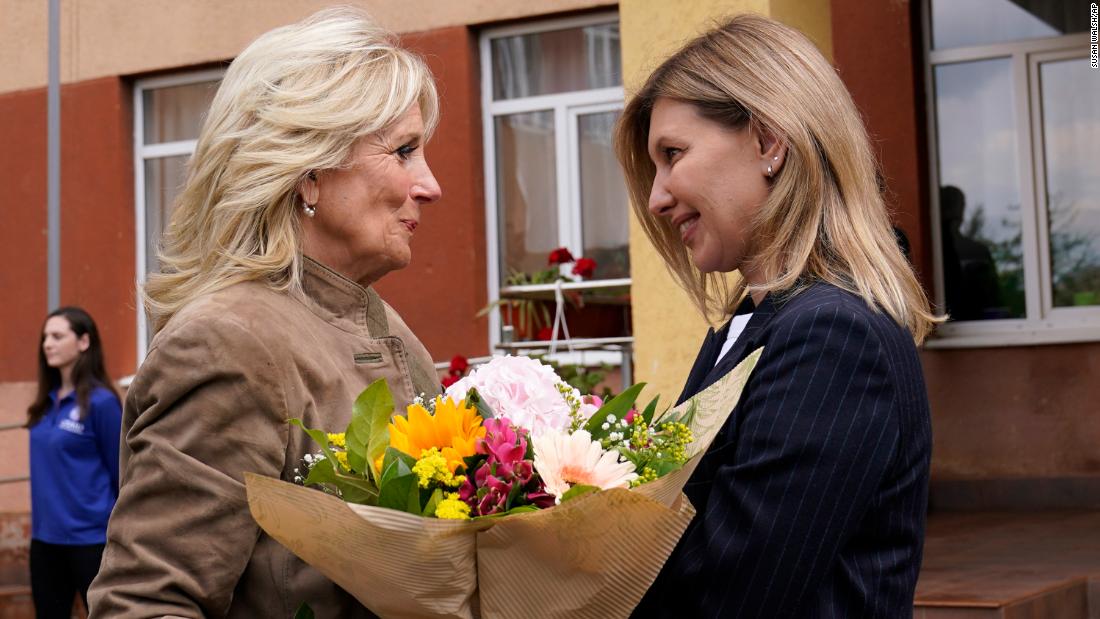 Uzhhorod, Ukraine (CNN) First lady Jill Biden spent part of Mother's Day making an unannounced trip to Uzhhorod, Ukraine, a small city in the far southwestern corner of Ukraine, a country that for the last 10 weeks has been under invasion by Russia.
At a converted school that now serves as temporary housing for displaced citizens, Biden met with Ukrainian first lady Olena Zelenska, who has not been seen in public since the start of the war on February 24.
"I wanted to come on Mother's Day," Biden said to her Ukrainian counterpart, the two women seated at a small table in a classroom of a former school that is now a source of temporary housing for displaced Ukrainians, including 48 children.
"We thought it was important to show the Ukrainian people this war has to stop.
And this war has been brutal."
Biden added, "The people of the United States stand with the people of Ukraine."
Zelenska, who early on in the Russian invasion sent a letter to Biden, has exchanged correspondence with her American counterpart in recent weeks, US officials tell CNN.
"First of all, I would like to thank you for a very courageous act," said Zelenska, speaking through an interpreter to Biden.
"Because we understand what it takes for the US first lady to come here during a war when the military actions are taking place every day, where the air sirens are happening every day, even today.
We all feel your support and we all feel the leadership of the US President but we would like to note that the Mother's Day is a very symbolic day for us because we also feel your love and support during such an important day."
Source