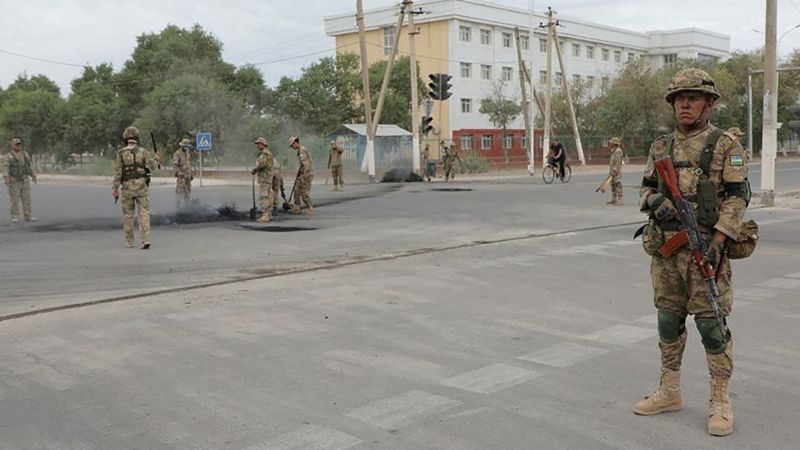 Uzbek service members are seen in Nukus, capital of the northwestern Karakalpakstan region, Uzbekistan on July 3.
Eighteen people were killed and 243 wounded during unrest in Uzbekistan’s autonomous province of Karakalpakstan last week, Uzbek authorities said on Monday – the worst bout of violence in the Central Asian nation in 17 years.
On Saturday, President Shavkat Mirziyoyev dropped plans to amend articles of the constitution concerning Karakalpakstan’s sovereignty and its right to secede.
Official reports said protesters had marched through the provincial capital Nukus last Friday and tried to seize local government buildings.
According to the prosecutor general’s office, 18 people died “from grave wounds” sustained during the clashes.
A truck which was burnt during protests in Nukus, capital of the northwestern Karakalpakstan region, Uzbekistan on July 3.
Kun.uz/Handout/ReutersTwo exiled opposition politicians in contact with people on the ground told Reuters they believed the real figure was much higher.
Russia, with which ex-Soviet Uzbekistan has close ties, said the matter was Uzbekistan’s domestic affair.
The European Union called for “an open and independent investigation into the violent events in Karakalpakstan.”Uzbek President Shavkat Mirziyoyev meets with local residents in Nukus, capital of the northwestern Karakalpakstan region, Uzbekistan on July 3.
There are an estimated 700,000 Karakalpaks among Uzbekistan’s 34 million people, most of them in the autonomous republic.
In 2005, Uzbek security forces crushed armed protests in the city of Andizhan, with 173 people killed in the clashes, according to official reports.
The government at the time blamed the crisis in Andizhan – located in the opposite, eastern part of Uzbekistan – on Islamist extremists.
Source