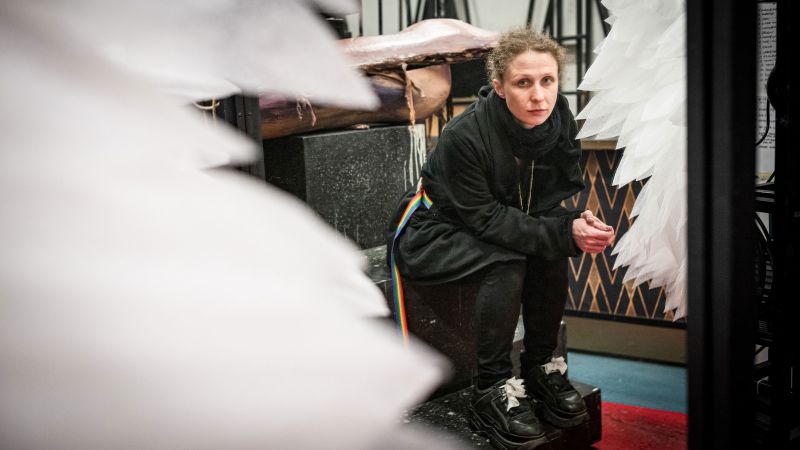 CNN —Maria Alyokhina, a member of the punk group Pussy Riot, which has long protested Russian President Vladimir Putin’s regime, said she escaped the country disguised as a food courier.
Alyokhina told the New York Times that though she once refused to leave the country despite multiple arrests and periods of imprisonment, she finally left after Russian authorities said she’d serve time in a penal colony.
She had been under “effective house arrest,” the Times said, and has openly criticized the war in Ukraine.
To avoid detection, she said, she dressed in a puffy green jacket typically worn by a food courier.
In photos she shared with the Times, her girlfriend is pictured wearing the jacket with a large lunchbox on her back.
During her week-long journey from Russia to Belarus to Lithuania, Alyokhina wore platform boots without laces.
The Times reported she will wear the boots when Pussy Riot begins touring this month.
“I don’t think Russia has a right to exist anymore,” she told the Times from Lithuania.
“Even before, there were questions about how it is united, by what values it is united, and where it is going.
But now I don’t think that is a question anymore.”Alyokhina has been arrested several times over the last decade for her performances with Pussy Riot.
She was released two months shy of the end of her sentence, but she’s been arrested and jailed six times since last summer for her activism, the New York Times reported.
Alyokhina told the Times she hopes to return to Russia, but for now, she’s in Iceland, where she’s organizing pro-Ukraine events with appearances from Icelandic artists like Björk.
Source