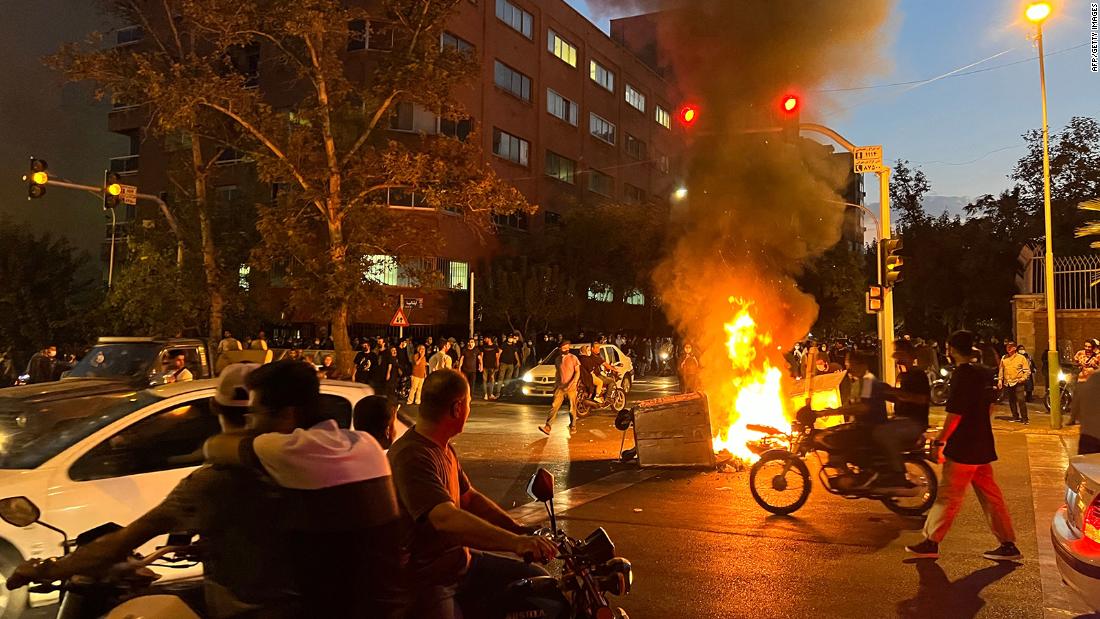 (CNN) The father of an Iranian woman who died in police custody last week has accused authorities of lying about her death, as protests rage nationwide despite the government's attempt to curb dissent with an internet blackout.
Amjad Amini, whose daughter Mahsa died after being arrested in Tehran by morality police , said doctors had refused to let him see his daughter after her death.
Public skepticism over the officials' account of her death has sparked an outpouring of anger that has spilled into deadly protests.
A protest in Tehran, Iran, over the death of Mahsa Amini, on September 21.
Protests and deadly clashes with police have broken out in towns and cities across Iran, despite authorities' attempts to curb the spread of demonstrations through internet blackouts.
The last time Iran saw such a severe blackout was when authorities tried to contain mass protests in late 2019 , after fuel prices increased by as much as 300%.
At the time, Iran was taken almost entirely offline -- which Oracle's Internet Intelligence called the "largest internet shutdown ever observed in Iran."
Dozens of people stage a demonstration to protest the death of Mahsa Amini in Tehran, Iran, on September 21.
It added that eyewitness accounts and video analysis show a pattern of "Iranian security forces unlawfully and repeatedly firing metal pellets directly at protesters."
A bin burning in the middle of an intersection during a protest in Tehran, Iran, on September 20.
International activists and leaders have also expressed concern about the protests and alleged police violence.
Sweden's Foreign Minister said on Wednesday that Sweden stands with Iranians mourning Amini, and demanded that authorities respect their right to peaceful protest.
Source