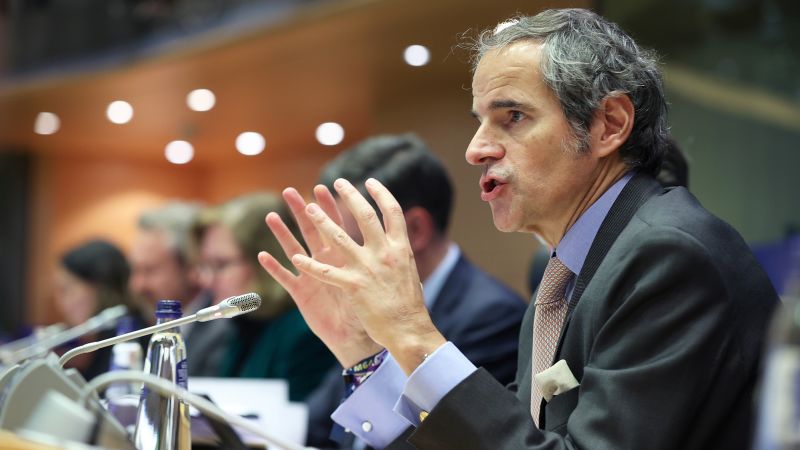 Iran has 70 kilograms (154 pounds) of uranium enriched to 60% purity and 1,000 kilograms to 20% purity, according to Grossi.
The reactor building at the Bushehr nuclear power plant pictured in August 2010.
IIPA Getty ImagesThe IAEA chief is heading to Tehran in February for a “much needed political dialogue” despite the Joint Comprehensive Plan of Action (JCPOA), a nuclear deal signed with Iran in 2015, being “in a very bad shape,” he said.
Grossi described the JCPOA as “an empty shell,” saying diplomatic activity linked to reviving the 2015 nuclear deal is close to non-existent.
Iran's nuclear chief Mohammad Eslami pictured in September 2022.
Joe Klamar/AFP/Getty ImagesLast year, the IAEA asked Iran to explain why traces of uranium were detected in three areas that were not supposed to be dedicated to nuclear activity.
On Tuesday, Grossi said that the move left his agency “blind” on several aspects, including how much material, equipment and centrifuges currently exist.
Grossi’s planned visit was confirmed by Mohammad Eslami, the head of Iran’s atomic agency, who said Tehran is expecting a visit from the IAEA chief, Fars news agency reported on Wednesday.
The decline in attempts to revive the deal has come at a time of increased tensions between the US and Iran.
The European Union has mediated indirect talks between Washington and Tehran aimed at relaunching the nuclear deal, but negotiations stalled after the Iranian government demanded further guarantees.
“The JCPOA has not been on the agenda for months,” US State Department spokesman Ned Price said on Tuesday.
The Biden administration also introduced sanctions on Tehran following a government crackdown on protesters, which has included executions of those accused of being involved.
Source