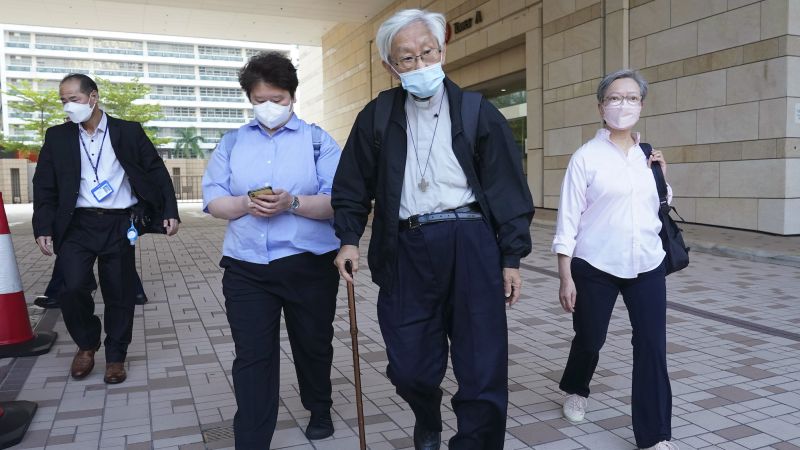 Hong Kong CNN —A 90-year-old former bishop and outspoken critic of China’s ruling Communist Party was found guilty Friday on a charge relating to his role in a relief fund for Hong Kong’s pro-democracy protests in 2019.
The silver-haired cardinal, who appeared in court with a walking stick, and his co-defendants had all denied the charge.
Outside the court, Zen told reporters that he hoped people wouldn’t link his conviction to religious freedom.
It is not related to religious freedom.
(Hong Kong) has not seen damage (to) its religious freedom,” Zen said.
The court heard in September that the legal fund raised the equivalent of $34.4 million through 100,000 deposits.
The Hong Kong government has repeatedly denied criticism that the law – which criminalizes acts of secession, subversion, terrorism, and collusion with foreign forces – has stifled freedoms, claiming instead it has restored order in the city after the 2019 protest movement.
Hong Kong’s prosecution of one of Asia’s most senior clergyman has cast the relationship between Beijing and the Holy See into sharp focus.
Zen has strongly opposed a controversial agreement struck in 2018 between the Vatican and China over the appointment of bishops.
Born to Catholic parents in Shanghai in 1932, Zen fled to Hong Kong with his family to escape looming Communist rule as a teenager.
He was ordained as a priest in 1961 and made Bishop of Hong Kong in 2002, before retiring in 2009.
Known as the “conscience of Hong Kong” among his supporters, Zen has long been a prominent advocate for democracy, human rights and religious freedom.
Source