3 baby chimps were kidnapped from a sanctuary. Their abductors are demanding a ransom 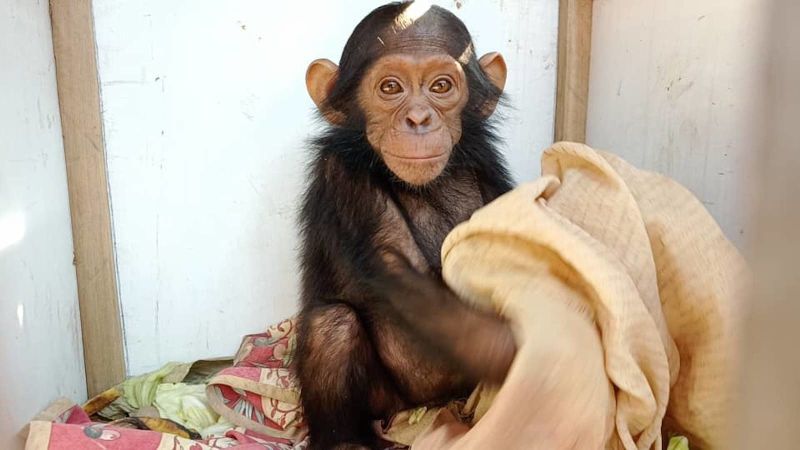 CNN —An animal sanctuary in the Democratic Republic of Congo (DRC) is facing demands for ransom money, after kidnappers abducted three of its baby chimpanzees.
“This is the first time in the world that baby apes were kidnapped for ransom,” Franck Chantereau, founder of the sanctuary where the kidnap took place, told CNN on Friday.
An hour after the break-in, Chantereau’s wife received three messages and a video of the abducted chimps from the kidnappers.
“They told us that they had planned to kidnap my children because they were supposed to come here on vacation.
But they didn’t come so the kidnappers took these three babies hostage and demanded a large amount of ransom from us,” Chantereau said.
The kidnappers claimed to have drugged the chimps and threatened to hurt them if Chantereau didn’t pay the ransom.
“Obviously, it’s impossible for us to pay the ransom,” Chantereau said.
If we pay the ransom, it could set a precedent and it could give ideas to others, so we must be extremely vigilant,” he said.
Months after its foundation in 2006, a group of people broke in during the night and set fire to the baby chimps’ sleeping place, killing two out of the five that were there at the time.
In September 2013, the sanctuary’s education center was set ablaze, but there were no casualties, according to Chantereau.
But Chantereau said the kidnapping won’t shake his determination to save baby chimps from the clutches of smugglers.
“To catch the babies, they have to kill the entire family in the jungle, usually between 8 and 10 individual apes, and a lot of the baby apes will die before reaching their final destination,” Chantereau said.
Source