The VL Studios, based in New York, NY, is pleased to report they will be continuing their collaboration with the production of Singing Revolution: The Musical. In fact, they recently created a video giving readers a look into the making of their new music video ‘Never Forget Who You Are.’ The video will go live on October 13, 2020 on the official Youtube channel and Facebook page of Singing Revolution: The Musical. The complete press release can be found here: https://www.thevlstudios.com/posts/making-of-never-forget-who-you-are-music-video-featuring-kristi-roosmaa-from-singing-revolution-the-musical.

‘Never Forget Who You Are’ was recorded at Mirrorstone Studios in NYC in March. However, shortly after, the lockdown began, and the United States was placed under several restrictions due to the COVID-19 pandemic. As a result, the creative team had to think of a new way to film a music video. To overcome the challenges brought about by the pandemic, an international team of creative professionals was brought together to record the video at the famed Tallinn Song Festival Grounds in Estonia.

Kristi Roosmaa, who sang ‘Never Forget Who You Are,’ arranged to fly to Tallinn to visit her family. The production team decided to hire Moondust Films and video director Vivian Säde, and flew them to Tallinn as well. The efforts of the team at Tallinn Song Festival Grounds, specifically Urmo Saareoja and Angela Kannelmäe, allowed Singing Revolution to receive permission to film the music video for ‘Never Forget Who You Are’ at the legendary Tallinn Song Festival Grounds. Estonian designer Liina Stein also provided additional aid with her beautifully crafted dress, known as the ‘Emerald Swan’. 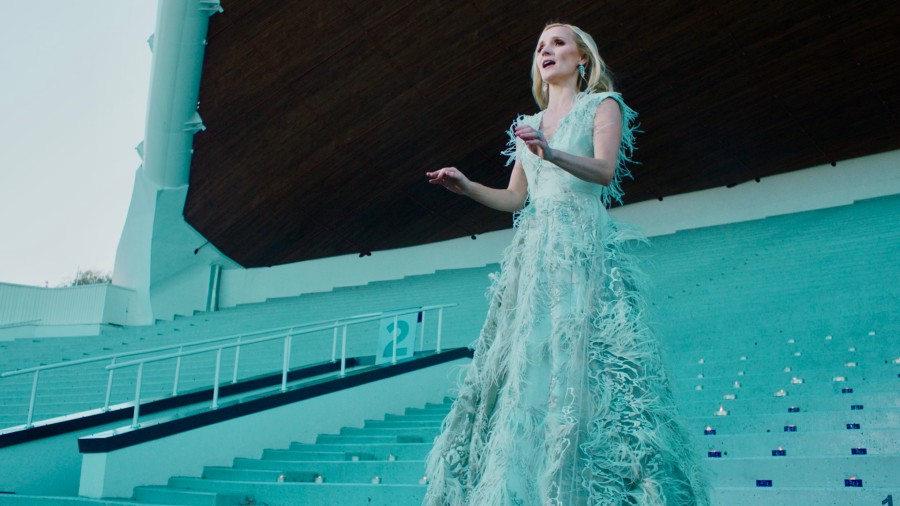 Roosmaa said about filming at the historic Tallinn Song Festival Grounds, “Having the opportunity to stand on Tallinn Festival Grounds and sing a song that reflects the true values of life was an incredibly empowering and emotional moment that will be imprinted on my heart forever. It reminded me of how I stood there as a child with tens of thousands of other singers and sang my heart out. Estonia’s Song and Dance Festivals are a celebration of our culture and homeland. They symbolize our strength and ability to thrive as a nation. I hope this beautiful song brings hope and joy to lives all over the world and reminds us to keep going, together."

The team was also able to carry out quick edits and last-minute changes to the music video with the guidance of musical creators Tony Spinosa and James Bearhart. Spinosa called the collaboration with Säde seamless thanks to the Estonian director’s coordination of all the moving parts of the project all across the world. Thanks to the efforts of everyone on the teams, the music video was successfully completed.

‘Never Forget Who You Are’ is from Singing Revolution: The Musical, a Europop musical set during the Estonian Revolution against the Soviet Union where natives struggled and fought for their freedom as well as the preservation of their culture. To show their struggle, hundreds of thousands of Estonians held public gatherings where they sang songs that were important to their culture and spoke speeches in protest of the Soviet Union occupation. The musical features star-crossed lovers who were involved in the revolution and is based on real-life events that took place in Tallinn. The musical aims to educate and inspire people with the Estonian story of their peaceful resistance against Russia. Its message is even more powerful during these difficult times. Singing Revolution: The Musical was written by Tony Spinosa and James Bearhart.

Tony Spinosa is a producer, stage director, choreographer, writer, arts leader and performer. He was a resident director on the Tony-Award winning Broadway revival of La Cage Aux Folles in 2010 and an associate producer on Thoroughly Modern Millie in Concert, Bombshell in Concert, and They’re Playing Our Song in Concert. He has been the director on more than 50 theatrical productions all across the US. His work includes Newsies, West Side Story, Cats, Charlies Chang and The Mysterious Salami.

James Bearhart is a writer, director and actor who has years of experience in the design industry. He has a Masters in Design from Central Saint Martins in London and a Certificate in Screenwriting from UCLA. He is a first-generation US immigrant from Ireland and is currently a Sloan fellow at the American Film Institute. His unique understanding of different cultures and how they approach storytelling helps him intuitively grasp what makes a story universally great.

Those interested may visit VL Studios’ official website for more details. Furthermore, the exclusive behind-the-scene video of the production of ‘Never Forget Who You Are’ can be viewed on Youtube once it goes live on the 13th of October.

For more information about The VL Studios, contact the company here: