Radionics Box is unveiling the RAD-5 orgone generator and radionic device built with Karl Welz orgonite. This orgonite powered radionic device is a top of the line workstation for both professionals and advanced users. It is designed to be used for standalone manifestation operations or in conjunction with the Super Manifestation Ultimate radionics software program. 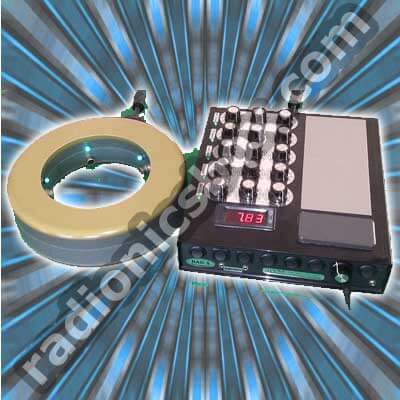 The RAD5 orgone generator is the designed to be ultimate power workstation for the professional or hard core radionics master. The large ring made of Karl Welz’s genuine HSCTI Super Orgonite has 5 extremely powerful orgone generators. Each generator uses the entire ring as its orgonite body. This means that when all five generators are operating at different frequencies it has the equivalent output power of 5 rings. In addition there are audio input options for 2 channels allowing for 2 generators to be driven by an audio signal rather than the built in pulse generator. This allows the RAD5 to become a subliminal suggestion and affirmation powerhouse device. By routing affirmations in audio format to those channels a user can direct those affirmations via a transfer couple or any of the manifestation programs to a destination target thereby opening up incredible new manifestation possibilities.

"The RAD 5 is the super powered radionics machine that you have been dreaming of. With 5 massive orgone generators and a huger generator ring made of real Karl Welz super orgonite this is the professional radionic device with the power to handle any manifestation task," says Radionics Box.

For more information about the RAD 5 orgone radionics machine, super manifestation radionic software and all other orgone radionics devices and accessories visit https://www.radionicsbox.com.

For more information about Radionics Box, contact the company here: