Fans have been eagerly waiting for the latest instalment from Daniel Williamson, a children’s book author from London, who has finally released his new Christmas themed book ‘When The Elves Took Christmas Back’ on the Amazon store. In a matter of weeks since it’s release the book received 20 5 star reviews! The book is available as paperback or can be read through Amazon’s Kindle app. The book is also registered in Kindle Unlimited allowing those with a subscription for the same to read the book for free. 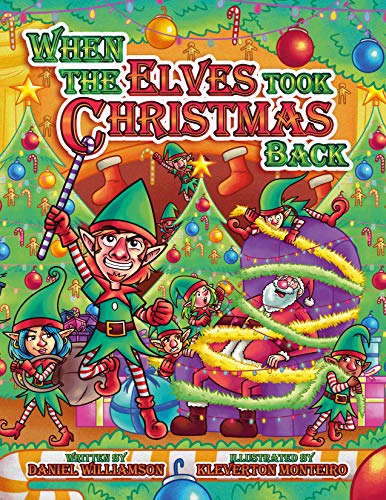 “Santa’s gone soft! Nearly all the children in the world are on the naughty list! But Santa’s been delivering presents to naughty list children! Completely against Elf laws! Santa must be stopped in order to rescue the integrity of Christmas! But what will happen to all the presents? It is still Christmas after all! The time for giving! Isn’t it?”

According to one of the book’s reviews, “Myself and my children love this book. The first thing you notice is the bright illustrations and my boys really enjoyed looking through the pictures as much as the story itself. A completely different take on the usual Santa story that had my boys (4 and 5 years) talking about for hours afterwards. A beautifully illustrated, well written family book that is definitely now firm favourite in our house, with the added bonus of actually improving my children’s outlook as they are desperate to be on the good list.”

According to another review, “Having read all the previous books/ebooks available from this author, I purchased this Christmas offering for my kids. They love the colourful illustrations and the quirky storylines and this one was one of their favourites... We have read it probably 10-20 times already before bed and we haven't even hit December yet...it's the only book at the moment that they want to read with me! "When the elves took Christmas back" is defo a 5* read for kids and adults alike!!!.....enjoy!!!!”

Daniel Williamson, the book’s author, was born in Perivale, London 28th April 1979. After 13 years in the capital, he earned a scholarship to Bembridge Private School on the Isle of Wight, largely due to his advanced English writing skills. During his teenage years, he participated in the school productions, band & choir, and also the South Wight Youth Theatre amateur dramatic society. He was involved in productions such as Carmina Burana, Hiawatha, Peanuts & Joseph, and his Amazing Technicolour Dreamcoat.

After attending Nottingham Trent University from 1998 to 2002 Daniel Williamson spent much of his time traveling the globe, even visiting Wonders of the World such as Christ the Redeemer, The Taj Mahal, and The Great Wall of China. After the birth of his daughter Carmela in 2014 his passion for writing was re-ignited. After a brief spell of scriptwriting, he turned his attention to children's stories due to the inspiration he gained from his mother Jacqueline's Montessori nursery and his own volunteer work at Great Ormond Street Hospital.

Daniel Williamson’s current titles include the 'Look At Me I'm Learning' series which focuses on teaching young children the basics of a new language through colorful picture books. Currently, the list of languages includes French, Spanish, German, Italian, Polish, Russian, Hindi, Arabic, Chinese Mandarin, and Brazilian Portuguese. Half of the 'Look at me I'm Learning' series has also been reverse translated to 'Look at me I'm Learning English' starting in French, German, Spanish, Italian and Portuguese. The educational, bilingual picture books aim to help children from all over the world learn how to speak English.

After completing his bilingual picture book series Daniel turned his attention to his original passion that is rhyming picture book stories. The first of the books which came out of it is a humorous original story called 'The Bee that made Jam' - all about daring to be different in a world where it's expected that everything stays the same.

Daniel’s next original picture book story was 'T-Rex Twins: The Brothers with Arms.' In the book, the T-Rex twins struggle to fit in and are even mocked by the other dinosaurs around them since T-Rexes are not supposed to have long arms. But before long the unusual twins are able to help other dinosaurs and learn to comfort each other by inventing the world's first hug. This leads them to friends and popularity once the word gets out. The book is a unique look at how being born different can be one’s biggest strength. Fans are very keen to see what’s next from this up and coming author since he has hinted that there’s many more humorous, original stories due in 2021.

For more information about Daniel Williamson, contact the company here: