New York City child custody lawyer Ryan Besinque releases a new article (https://www.besinquelaw.com/child-custody-lawyer-new-york/) that explains how child custody is determined in a New York Divorce. The lawyer mentions that one of the most contentious in a divorce is child custody. As parents, both spouses would want to have more time with their children. However, divorcing couples often don’t see eye-to-eye on this matter, and accommodating each parent's request may be hard to do.

According to the New York City child custody lawyer, “While each parent does have a critical say in child custody matters, especially when they can come together cooperatively to work together toward custodial terms, what the court will always consider, first and foremost, is the child’s best interests.” 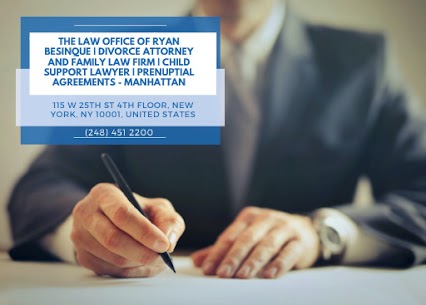 The lawyer explains that divorce is used to hand over child custody to the mother. However, the times have changed and that is not the case in present times. Ideally, it will be better for the children if the parents come to an agreement that will best suit the children’s welfare.

In the article, attorney Besinque also explains the factors that are considered during child custody negotiations. The lawyer says that each family is unique and the courts will take each situation of the parents into consideration. Other things they will consider include who the primary caretaker is, the parenting skills of each parent, where the child lives, the quality of home life, the parent’s schedule, and more.

Lastly, attorney Ryan Besinque emphasizes how important it is to seek the help of a skilled divorce lawyer when it comes to divorce and other family matters related to divorce such as child custody. Having an experienced lawyer may help the client understand their rights and responsibilities, and it will help them make guided decisions about their next steps.

About the Law Office of Ryan Besinque

Ryan Besinque, Esq. is an experienced New York City child support attorney. He has witnessed firsthand the financial and emotional toll divorce and separation can take on families during his years of practice. He tailors his approach to ensure that each client is fully represented and feels optimistic about the future. Contact them today at (929) 251-4477 to schedule an appointment.