Meat Motor, an online publication that focuses on sports science studies to help its reader become faster cyclists and improve their athletic endurance, has published an article that recommends the coldest water bottle for cyclists from a selection of 7 popular bottles available on the market.

The founder of the website, Jordan Fowler, is based in Texas where average temperatures during summer may reach highs of 100 degrees Fahrenheit and the heat index may often touch 104 degrees Fahrenheit. Anyone venturing out into the smoldering heat needs to take precautions to ensure that they are adequately hydrated at all times to avoid the risk of a heat stroke and other illnesses. The article recommends that all cyclists and endurance athletes planning to ride in Texas should carry water bottles that provide enough insulation to keep the water cool in the biting heat. 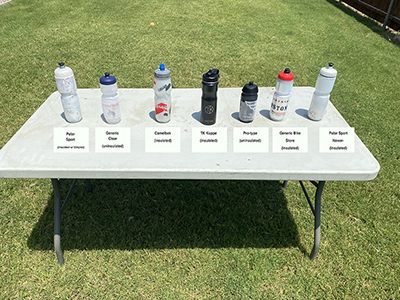 The website followed a standard test protocol that ensured the water bottles being evaluated were all given a fair chance. They filled each bottle with 16 oz of water, and then frozen in a deep freeze for 48 hours. They then lined up each bottle in direct sunlight on a day in Texas where the heat index was 104-105º. They then proceeded to take the internal water temperature at 1.5 hours using two digital thermometers. They also measured the external water bottle temperature using a scan thermometer, a reading that didn’t directly correlate to internal temperatures. At two hours, they poured out and weighed the melted water while leaving the unmelted ice block in the bottle. They then repeated this pour and weigh at three hours.

The test was performed on 7 bottles including a typical pro-uninsulated bottle in the color black which was the baseline, a typical clear uninsulated bottle, a generic insulated bike store-branded bottle, a Polar insulated bottle with interior dimpled indentions, a Polar bottle without interior indentions, and a slightly different lid, a Camelbak insulated water bottle, and a TP Kuppe aluminum insulated water bottle. The website includes a detailed table that lists values for the 1.5-hour internal water temperature in Fahrenheit, the 1.5-hour external water temperature in Fahrenheit, the 2-hour amount of melted water in grams and ounces, the 3-hour amount of total melted water in grams and ounces, and finally the weight of the empty bottle.

The article then summarizes its findings by crowning the Travel Kuppe Vacuum Insulated Stainless Steel Cycling Sports Water Bottle as the clear winner. The winning bottle kept the water a lot colder than any competitor along with providing a very low melt rate. The downsides are that the bottle is very heavy, a little more than 200 grams heavier than a traditional plastic insulated bottle of the same volume. The article says that given the bottle’s imposing weight, it would still recommend the bottle due to its cooling capabilities.

The bottle gets noticeably hot to the touch. However, this does not affect its internal temperature. The bottle is not squeezable due to its choice of materials which means that it has to be tipped over to drink water from it. The flow rate of the water is nothing spectacular. It has a flip cap instead of a traditional water bottle cap but is still openable via one hand. The website did not test for the durability of the bottle from falls. The winning bottle was BPA-free and there are no ecological concerns.

The article wraps up by assuring its readers that unless they are elite cyclists, the choice of cycling bottle is not going to be a make or break difference to their podium prospects. The article expresses a preference for stainless steel bottles as plastic bottles can wear out with use. Regardless of the choice the readers go with, the article strongly recommends insulated water bottles that can keep the water cooler for longer.

Readers can read the full article and many more such articles on other interesting topics on the Meat Motor website at meatmotor.com.

For more information about Meat Motor, contact the company here: