IMHO Reviews have been watching closely the development of an upcoming NFT game called Drunken Dragon and has just shared an important update with their readers.

Drunken Dragon is an NFT project on Cardano Blockchain that is going to be a play-to-earn game. It is being developed by Vledic Franco and Jorge Ferretiz AKA F3rraz (who is an art director of the project). During the month of September, the Drunken Dragon team has gained new members: one senior game developer, one backend developer, two 2D artists, and one writer. The game is being developed in Unreal Engine 4 to satisfy the current expectations of the gamers. 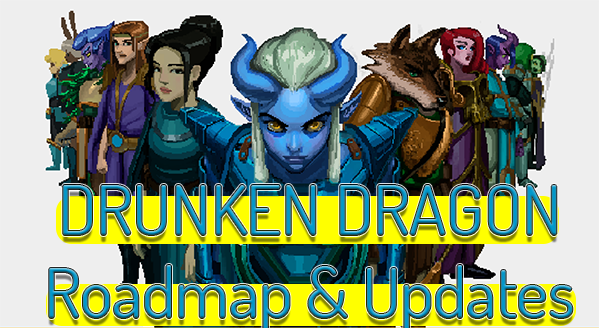 The roadmap has been updated for the project and it shows that the mobile game will be released in Q4 2021. Although at that point it won't be a ready-to-play game, the users will be able to create Pixel Art Dioramas, display their NFT collections, and share them with friends and other members of the online community. The members of the discord community are very excited about the release. Of course, everyone wants to play the game but it is important to understand that NFT space is about collecting digital art. Drunken Dragon has high-quality digital 2D pixel art and unlike many other NFT projects, it has a mini-game which is a unique way to show off your collectibles.

Vledic Franco explained in the "Ask Me Anything" session, that the game will be delivered in parts allowing the participants to slowly get to know the game world and all of the functions of the game. They will continue building it based on the user's feedback. A complete world with the first quests will be ready in Q4 of 2022. The community is a very important part of any NFT project, and the whole Drunken Dragon project is being build with that in mind.

Mr. Franco stated that it is important for developers to create a game that will be interesting to play and then integrate parts of the blockchain technology into it to establish play-to-earn mechanisms. This is a different approach in comparison to most of the play-to-earn games that are built around the idea of play-to-earn but have the most important factor - the engagement of the game - missing.

"Those games are doomed once the similar games with slightly better economics appear", - said Vitaliy, the owner of IMHO Reviews.

Another major difference between Drunken Dragon and many other games on the market is that this game is not going to be a pay-to-win game. The game is promised to be fair to all players with multiple mechanisms to avoid whales owning the whole continents. Grandmaster Adventurers purchased collectibles (NFT collection) won't give much of an advantage to the players. Both Grandmasters Adventures and pixel tiles can die during the quest. The main difference is when the Grandmasters Adventures die they might lose some level points, and when pixel tile dies it will no longer be playable.

"The reason I care about the Drunken Dragon NFT project is that I see how much passion developers have for this game and how much they care about the community members and community growth. I know how it usually is in the NFT space: people come and go, mint, flip, and move to the next project. However, in this community people stay and help develop the project further, help new members, discuss the development, communicate, and have fun playing the chat games", - explained Vitaliy.

Over the past week, many Influencers started paying attention to Drunken Dragon and started making videos about it. More and more bloggers including Coin Bureau and BitBoy Crypto are mentioning the Drunken Dragon game, and the community already grew to over 3,000 members. According to IMHO Reviews, the project is not overinflated yet and it is just growing organically as it was designed in the beginning by creators to avoid unnecessary price fluctuations.

The next milestone is scheduled for September, 29 when the end-of-the-month developer update live stream will take place. More details can be found on Drunken Dragon Websites and Drunken Dragon Discord Community.

For more information about IMHO Reviews, contact the company here: