Bronx child custody lawyer Juan Luciano releases a new article (https://divorcelawfirmnyc.com/child-custody-lawyer/) that explains how New York State determines Child Custody. The lawyer mentions that there is nothing more important than caring for the well-being of the children when it comes to a divorce or a separation. The physical and emotional welfare of the children should be the responsibility of the parents after a divorce.

According to the Bronx child custody lawyer, “In New York, laws are set up to protect the best interest of the child. Child custody lawyers and the courts will take a close look at the physical, emotional, and financial family dynamics in order to ensure that the children are best served in any custody determination.” 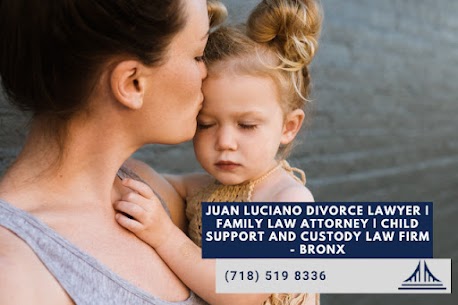 The lawyer explains that the court will work hard to protect the child’s best interests during a divorce and will consider many factors before awarding custody. These factors include where the child is going to live, the environment in each parent’s home, the parent's work schedules, history of domestic abuse, history of substance abuse, and the income of both parents.

Attorney Juan Luciano says that the courts will always attempt to rule in favor of what they believe is the best for the child. During a divorce, both parents may become too caught up with the process as well as the emotional distress brought upon by an impending divorce. Unconsciously, parents may forget about the child’s welfare.

In the article, the lawyer adds that in custody disputes, parents are expected to keep their children’s best interests but this may prove to be a challenge at a time when emotions are high. This is when the legal system in New York steps in to be the objective third party. The courts will determine custody based on what they find will ultimately be best for the child.

Additionally, attorney Luciano says that the court will work hard towards ensuring that the child will maintain a close and loving relationship with both parents. This is when a talented child custody lawyer comes in. A great attorney may be able to help the client assess their situation and find a strategy that may be beneficial to the client and the child.

Attorney Juan Luciano believes that having a skilled attorney in matters such as child custody and divorce makes all the difference. A skilled attorney may be able to help the client receive a more favorable outcome in the divorce case.

Juan Luciano has spent his career in the complex legal world of family law. He has earned a reputation for excellence at the negotiation table as well as when in court. He is also fluent in Spanish. Contact them today at (718) 519-8336 to set up an appointment for a consultation with Bronx family law attorney Juan Luciano.