Backyard Bug Patrol is a company that fully realizes that insects can not only be a nuisance but bites from some of them can cause serious health problems. Such is the case with mosquitos. That’s why this company decided to post a new blog that talks about how World Mosquito Day brings much-needed awareness to the health problems that these pesky and persistent insects can create through their bites. A topic that this company, which is renowned for its mosquito services in and around Great Falls, VA, is all too familiar with. The blog article can be seen in its entirety on the company website at https://backyardbugpatrol.com/mosquito-control/world-mosquito-day/. 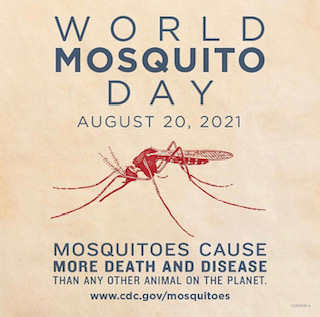 In the newly posted Backyard Bug Patrol blog, it starts by saying that this year World Mosquito Day took place on August 20th. It’s not a day that was ever intended to celebrate the presence of mosquitos but to instead bring important attention to mosquito-borne illnesses. The blog then clarified what exactly a mosquito-borne illness is. It states that the diseases that mosquitos most frequently spread are viruses. Among the most common of these are Dengue, West Nile virus, eastern equine encephalomyelitis (EEE), Zika, St Louis encephalitis (SLE), La Crosse encephalitis, chikungunya, and western equine encephalomyelitis (WEE). The blog stated that the prevalence of these diseases in a particular area is based on several factors. What makes mosquito-borne illnesses so concerning is that many of them initially show no signs or just mild headaches and fever in children. Severe outbreaks can impact both children and adults.

This new Backyard Bug Patrol blog post also addresses the question of how prevalent diseases from mosquitoes are. It mentioned that in the United States the most common mosquito-borne illness is the West Nile virus. This virus infected some 2,647 people as recently as 2018 and 167 people succumbed to the disease. In comparison, in 2019 only 171 cases of chikungunya virus were detected a big drop from some 2,811 cases of this virus that were reported in 2014. The blog also mentioned that Vika first became prevalent in 2015 in Brazil and despite the health risk that it poses to those that get infected with it, only 34% of Americans surveyed said that it concerns them. This last fact is what makes the existence of World Mosquito Day so important. The blog ended by saying that Backyard Bug Patrol is the right company to call to lessen the threat of mosquito-borne illnesses. More useful and interesting information on how Backyard Bug Patrol goes about applying treatments that effectively control mosquitos can be seen on their Facebook page at https://www.facebook.com/BackyardBugPatrol and on the company website.

Many 5-star customer reviews attest to the fact that Backyard Bug Patrol’s mosquito control services really work. Tracy E. stated, “I am an original customer of Backyard Bug Patrol, and would not let a season go by without them. We have a great deck in a yard that was besieged by mosquitoes. Just going out to grill a burger was like preparing for a trek through the Amazon! Backyard Bug Patrol changed all of that. Even with the challenges of tons of ivy and ground cover, plus a neighbor with a huge water feature, they keep our yard mosquito-free. Throw another shrimp on the bar-be, we’ll be out here for a while!” Tofique G. proclaimed, “We have been using BBP for a few years now and really appreciate them helping us to not have mosquitoes or ticks in our yard!” These reviews and many other glowing reviews just like them can be seen on the company’s Google Maps Business Listing which can be found at https://goo.gl/maps/6zRWtU89Ri82.

Other pest and bug services that the company offers include rodent, ant, stink bug, snake, termite, and tick control services. This company almost exclusively uses organic pest control products that pose no threat to people or pets. Those that aren’t interested in celebrating world mosquito day and instead would like to better control the mosquito populations in their yard, can contact Backyard Bug Control by phone, email, or by website contact form.