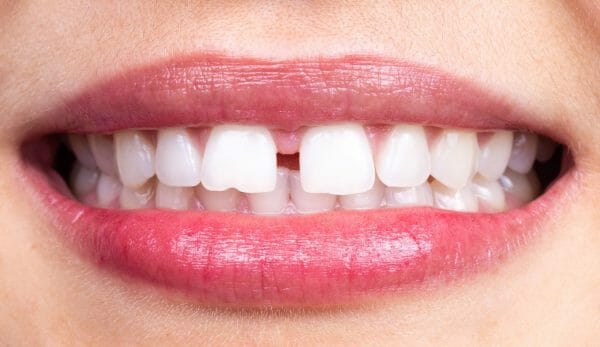 When evaluating a diastema, orthodontists look at the causes for the gap. Several factors might contribute to a diastema, including an overgrowth or low extension of the tissue (frenum) bordering the gum and the upper front teeth, previous or current oral habits (such as thumb or finger sucking), a mismatch between the size of teeth and the jawbone, extra (supernumerary) teeth impacted under the gums, missing or undersized teeth, or gum disease.

For many patients, the gap is simply a cosmetic issue. However, in some cases, a diastema is a sign of a more serious problem—such as missing teeth, gum disease or an improper bite (such as a partial front tooth crossbite).

“Whether a patient wants to fix the diastema for cosmetic reasons or there are other orthodontics issues that need to be corrected, a diastema can be fixed with braces or Invisalign,” said Dr. Redford. “However, if a patient is young, children’s braces would not be used to correct the problem unless other orthodontic issues were at play.” This is because transitioning from baby teeth to adult teeth can result in temporary diastemas, which might close when all the adult teeth come in. In these cases, kid’s braces would be inappropriate because the gap teeth may correct themselves naturally.

Once patients are adolescents and it is clear that a diastema won’t spontaneously correct, more options become available to close gap teeth. “Our orthodontic office offers teen braces and Invisalign,” said Dr. Redford. “Both are good options for closing a space between teeth, but the final decision will be based on all the orthodontic needs of the patient. In some cases, Invisalign is not appropriate for fixing certain bite issues, or a patient may be too immature to wear the aligners as directed.”

Some patients may be concerned that Invisalign cost will be significantly higher than that of braces. While there may be slight differences between Invisalign and braces, the cost of treatment is more influenced by the severity of the orthodontic case. An exact quote for the financial investment will be provided after a full evaluation and discussion of appropriate treatment options.

For patients with a diastema, there may be additional orthodontic issues that need to be addressed, such as crowded bottom teeth. In such situations, braces or Invisalign may be used to close the space between teeth on the top while also fixing crowded teeth on the bottom.

“Advanced orthodontic technology provides a variety of treatment options for patients,” said Dr. Redford. “At Burke & Redford Orthodontists, the focus is on treating all of a patient’s orthodontic needs as efficiently and affordably as possible. With such a wide variety of treatment options, our doctors are able to offer and advise the one that best fits the needs of each individual child or teenager.”

Parents looking for a teen or child orthodontist in Riverside County, CA, may contact Burke & Redford Orthodontists for a free consultation at either the Temecula or Lake Elsinore offices.