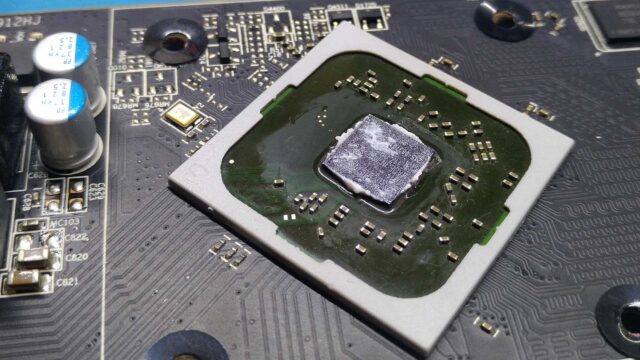 A debate that will seemingly never be settled in the PC world is which thermal paste is the best. On top of that, nobody will ever agree on the most optimal application pattern. Some argue a drop of Arctic Silver is ideal, while others say you need an X-shaped application of liquid metal. Some swear by thermal pads. However, one thing we can all agree on is that something is better than nothing. New thermal paste tests from Germany bolster this conclusion by adding a few new materials to the paste roster, including toothpaste, a potato slice, cheese, and even ketchup. As expected, none of them are as good as thermal paste, but ketchup performed impressively.

The tests were run by a member of the Computerbase.de forums and flagged by TechSpot. The enterprising tester tried a variety of thermal paste types on a Radeon R7 240 GPU, an entry-level, 30W GPU that’s passively cooled. However, for the tests, they added a fan to try and prevent throttling. The GPU runs at a mild 780MHz but can still generate enough heat to saturate a non-optimal cooling solution.

To find out which paste was best, they used a wide sample including the aforementioned condiments. Each test consisted of a five-minute run of Furmark, which is a torture test for GPUs. They noted the GPU goes through three phases of thermal throttling when it hits 105C. The third stage lowers the clocks to 300MHz, but if it still hits its max temperature it shuts off the system.

Among the non-standard types of paste tested, ketchup was the standout material. Although it allowed the GPU to get up to 71C, it didn’t throttle at all. That was not the case for the slice of potato (above), which went to throttle stage three and hit 105C. The PC didn’t shut down, though, so it’s theoretically possible to keep using it. A slice of cheese performed slightly better than the potato. It ended up hitting 105C too, but only got to the first stage of throttling. Toothpaste also performed admirably in comparison, hitting 90C with no throttling. [I can’t believe I’m reading this right now. -Ed.]

In addition to the bizarre materials, the person also tested standard pastes and pads. The top performers were Arctic MX4 and Corsair’s TM30 paste. They let the GPU get up to 49C and 54C, respectively. Overall, they declared the Arctic TP3 thermal pad the winner despite its max temp of 61C. We’re guessing that’s just because it’s easier to use than paste, and can be reused over and over. If you want to peruse the photos and benchmarks, they thankfully uploaded them all to Google Drive.