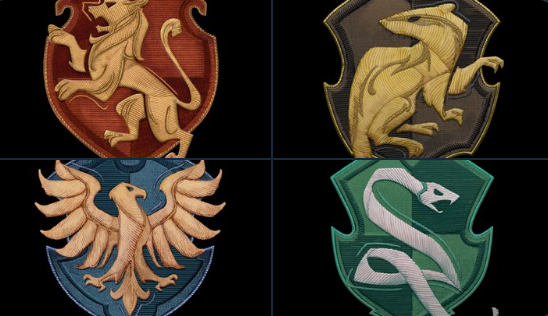 Designing iconic house badges for #HogwartsLegacy was no easy task! Which of our new house patches is your favorite? pic.twitter.com/XAsw3pc9et

Game studio Avalanche has shared a look at Hogwarts Legacy’s new and improved Hogwarts house badges. As seen in the tweet above, there are new stylized renders for each of the four houses: Gryffindor, Slytherin, Ravenclaw, and Hufflepuff.

Hippogriff-eyed fans have already noticed some key differences between these new badges and the ones depicted in the original Harry Potter books. In addition to their overall softer and embroidered look, Ravenclaw is now presented with the appropriate blue and bronze colors, while the Hufflepuff badger is facing left instead of right. Can we chalk these differences up to the fact that this game takes place a century in the past, or did the developers simply want to put their own unique spin on things? Either way, they look ready to be sewn onto some stylish new wizard robes.

Hogwarts Legacy is set for a release on Nintendo Switch, hopefully alongside the other platforms’ versions this holiday season.